July was a brutal month for global investors in Chinese stocks.  A spate of regulatory announcements, notably a clampdown on the education tutoring sector, and subsequent market volatility have forced investors to seriously rethink their China strategy.  While it is easy to look longer term and count on continued growth in the Chinese economy, that should not overshadow the significance of the government’s actions in the past month. 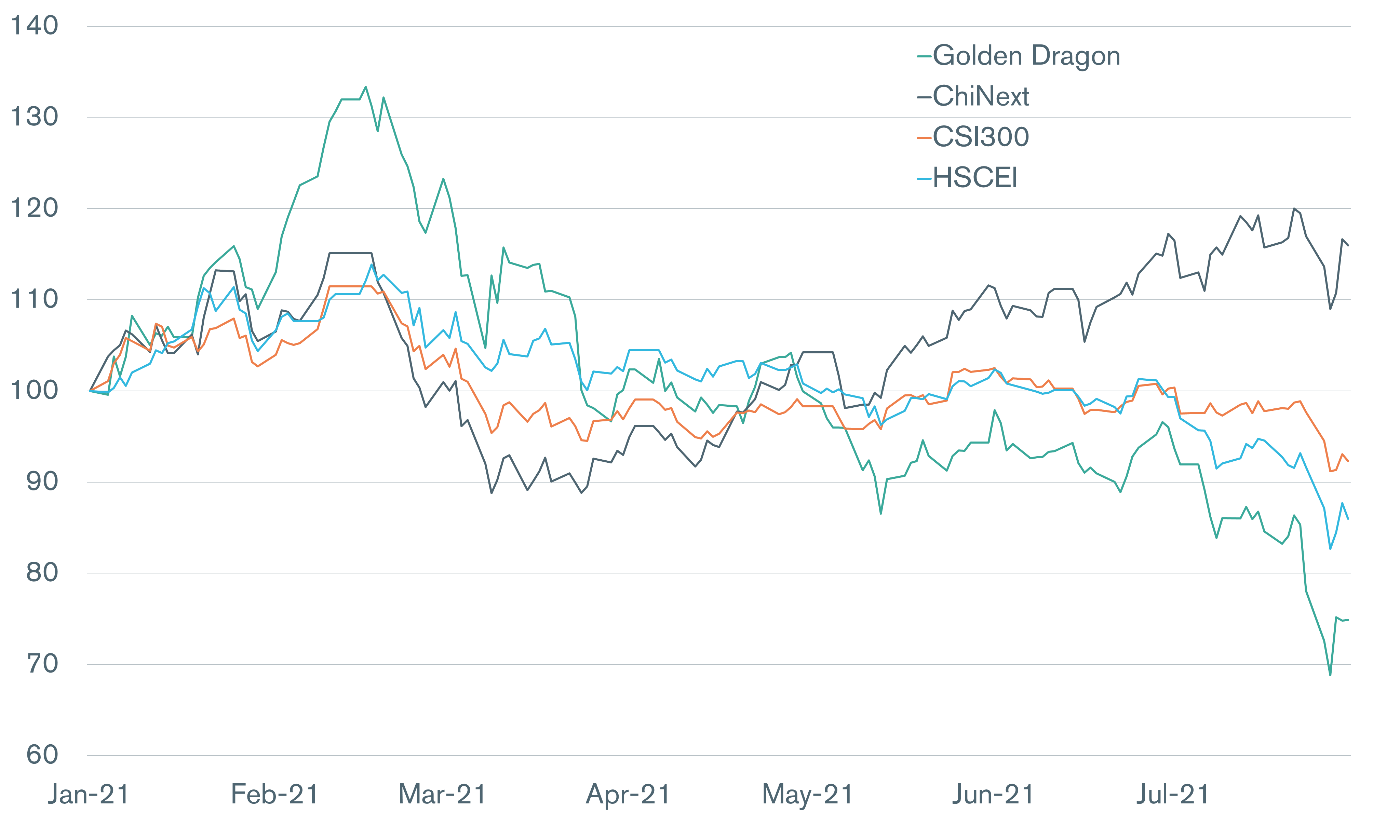 The China Securities Regulatory Commission hurriedly called a meeting with leading domestic and foreign investment firms to try and soothe concerns, but they aren’t in charge: the impetus is coming from the very top, and it is ideologically driven.

The reform era has been over for some time under Xi Jinping; in taking aim at private education, Xi has demonstrated once more that he is pursuing a very different set of priorities.

The climate for China investment is also turning more hostile in America. An executive order signed by President Joe Biden that restricts equity and bond investment by US beneficial owners in sanctioned Chinese companies went into force on Monday. Far from rolling back a directive by Donald Trump that took effect in June, the new order expands to 59 from 48 the blacklist of Chinese tech and defence firms alleged to have links to the Chinese military.

Those hoping for a return to the sort of engagement with China that marked the Obama administration have completely misread the mood in America.

The Securities and Exchange Commission (SEC) too has continued the capital war with China by pushing for better, fuller financial disclosure by Chinese listed companies. This is a storm that has been brewing for some time. The fiascos of Luckin Coffee and Didi Global wholly justify a strengthening of investor safeguards. But few expected that the real risk to US listings of Chinese companies would come from Beijing, yet that is exactly what has happened.

China has many justifiable concerns about the internet sector.  Governments around the world harbour similar worries as they struggle with a range of issues related to the digital economy. These include the emergence of monopolies and the anti-competitive practices of dominant platform companies; the risk to financial stability posed by the rapid growth of online non-bank lenders; and the data security of individuals and corporations.

All these matters deserve the attention of national supervisors and perhaps even call for cross-border regulations.  In that context, the Chinese government’s recent moves against Ant Group, Meituan and Didi can be classed as belated regulation rather than a direct attack on private enterprises.

But the harsh treatment of the education sector exposes how much the framework for policy and regulation has changed.There is no back-to-normal for overseas Chinese listings.

The SEC will remain tough on disclosure for both corporate-level data and the connections which the listed companies have to the Chinese Communist Party (CCP). For its part, Beijing will not ban overseas listings entirely, but plans will be scrutinised by the Cyberspace Administration of China (CAC), making the process more onerous and time-consuming.  Even if the CAC’s standards are met, Chinese policymakers have shown they are prepared simply to block the common route to an overseas listing, namely via the Variable Interest Entity (VIE) structure.

Foreign investors are not the only victims of the assault on private tutoring companies. By forcing these firms to register as non-profits, Beijing has written off their domestic business.  The attack, then, is aimed at domestic capital as well as foreign capital. The leadership in Beijing may well have been motivated by concern about falling population growth, given that the exorbitant cost of after-school cramming to ensure good grades in the all-important gaokao college entrance exam is widely seen as a reason not to have children. But the Party’s actions will fail to address either problem.

Instead, by taking down wholly legal onshore operations, the CCP has shown a merciless face which too few in the business and investment community have been prepared to acknowledge as the nature of communist rule.

So where does this leave foreign investors?  Has China become uninvestable?  There was a Rmb4.4bn outflow from Shanghai via Connect in July and a Rmb15.2bn inflow into Shenzhen. Total investment into China since the inception of Connect is around Rmb1.44trn. The US ADR story is, of course, very different; hundreds of billions of dollars have been wiped off the market value of Chinese names. Market volatility compounds an already demanding environment for Chinese stocks. 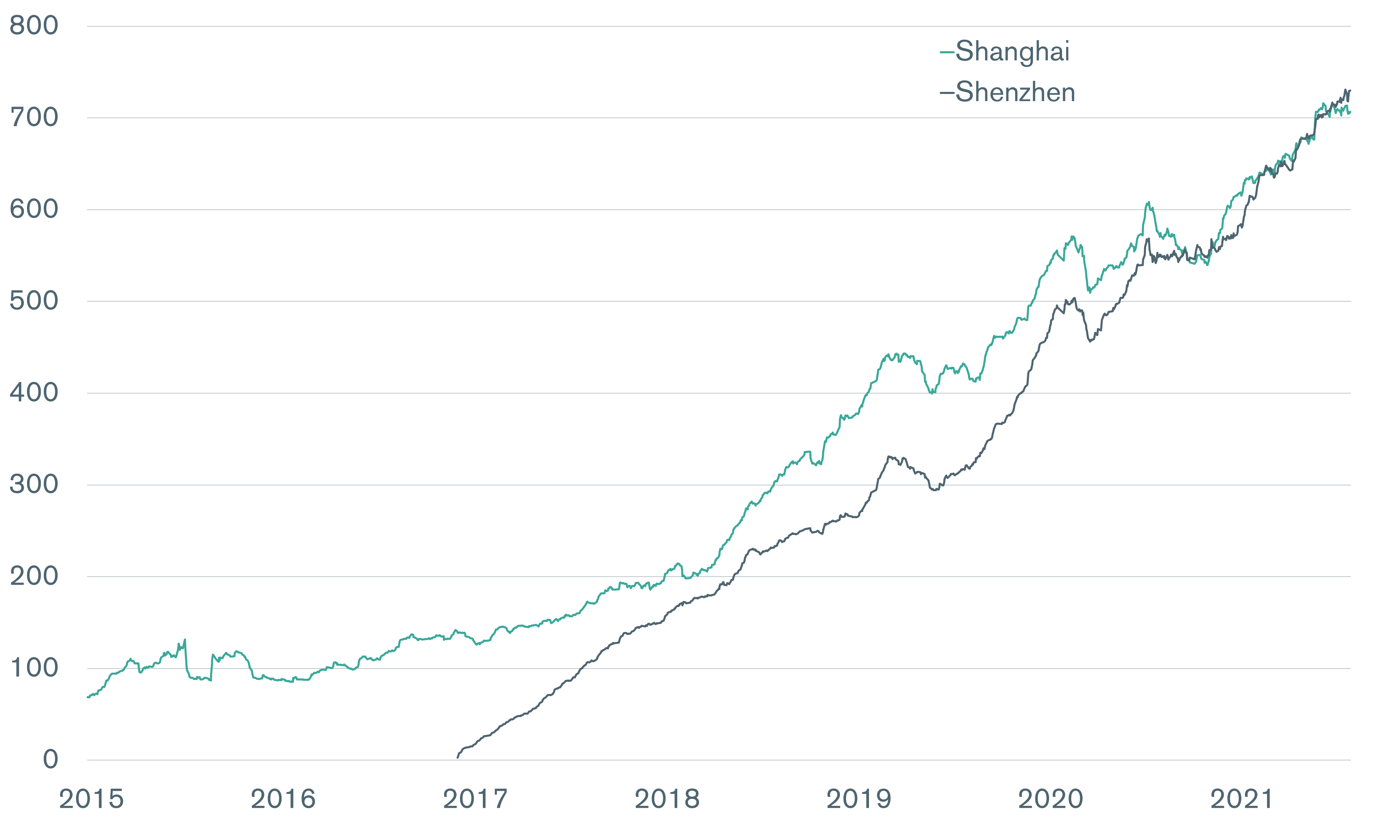 Biden’s blacklist of Chinese stocks is the clearest sign that the Sino-American capital war, part of a broader decoupling of the two economies, is very much alive. Indeed, there is a push from some quarters to have the EU and the UK follow America’s lead and restrict investment in certain companies.  More broadly, China is very likely going to play an ever bigger role in investors’ ESG considerations: ultimately, how can you invest in an ethical and socially conscious way in a country which is one of the most egregious abusers of human rights? That, after all, is a key part of Biden’s rationale for sanctions.

The picture is now further blurred by China’s actions. The CCP is looking to control not only overseas listings but, more importantly, the underlying businesses which Xi Jinping deems at odds with his vision of China. Hong Kong may seem to be the natural beneficiary of an exodus of Chinese firms from New York. Yet the listing venue is irrelevant if you are forced to become a non-profit entity.

It was always taken as a given that pragmatism prevailed in the corridors of power in Beijing and that China needed foreign capital and would keep the investment doors open. Well, after the collapse of education stocks that assumption no longer holds. Beijing is perfectly willing to slam the door shut on foreigners when it suits its purpose.

And with China responding more assertively in kind against EU and US sanctions, it can’t be assumed that investors from those jurisdictions won’t become pawns, or even financial hostages, in the fight between China and the US.

Investors, then, find themselves in uncharted territory.  China’s markets are just too big to ignore. Its fast economic growth, large number of listed companies and high trading volumes mean that money will continue to flow into China.  Even with the Trump-Biden sanctions, net inflows via Connect in the first seven months of 2021 reached Rmb234bn. But investors surely need to rerate China risk.

The crushing of Didi and the education firms has sounded the alarm. If the fund manager doesn’t hear the bells ringing, the risk management and compliance departments should.

This isn’t just another market sell-off that presents a buying opportunity – China’s investment rules and risks have changed.

Nor should investors think that these changes have appeared out of thin air. Be it Ant Group, Didi or the education companies, it is becoming clear that corporate executives knew more about the looming shift in regulation than they let on. Investors need to demand more from China’s high-profile companies.

The investment landscape in China has become hugely complex.  If the ready conclusion from the past few weeks is that ideology and politics have become more significant market factors, how do you value that? Projections of growth and cash flows fit nicely in a spreadsheet, but how do you price in Xi’s latest speech on the China Dream?

Even investing in companies which are aligned with CCP policies is uncertain, because who can say whether the valuation or growth of those companies will be acceptable to the state?  China isn’t uninvestable, but it’s going to seem like that for a time.